Timestamping is performed via a novel form of mutual distributed ledger (MDL) that broadcasts ledger rows to a loosely organised network of receivers. The broadcast is agnostic in that it does not know or care if there is any receipt of it by the receivers. Agnostic broadcast mode optimises the throughput of timestamps – that consist of an officially recorded time (called MetroTime), a unique universal identifier (UUID) and an optional description (such as a file hash) – and simplifies establishing and maintaining the network.

Timestamping is recording when a certain event occurs via a sequence of characters. A typical example is the delivery of a document. The term derives from ‘stamping’ documents with a seal or stamp with the current date or time in ink on paper documents. Timestamping is used to confirm various transactions, deliver or receipt of notices, tracking a sequence of documents through a process, registering copyright, or even recording transactions on other MDLs or blockchains.

When someone sends MetroGnomo a document or document hash, MetroGnomo returns a timestamp. The timestamps’s UUID, MetroTime and description are recorded on a MDL not owned by anyone. Although the document’s hash can be included in the timestamp itself, any document storage request (10MB maximum) will utilise MetroGnomo’s publicly accessible central storage to maintain the simplicity of speed of the timestamping MDL. The MetroTime is the time at which an event is recorded by a group of peer-to-peer computers holding the MDL, not the time of the event itself. The recording is done by ‘broadcasting’ to the receivers. If a receiver is not active during a broadcast, the next time it needs to use MetroGnomo it has to update its version of the ledger first. A group of dedicated receivers exist to provide constant service.

MetroGnomo website allows users to observe new ledger entries live – as received. The files held on MetroGnomo’s publicly accessible central storage are linked to ledger entries, and can be downloaded using the “Retrieve File” tool. In future these files may be held on a separate content chain.

MetroGnomo has been designed to be fast and ‘light’ in computing terms. Users of MetroGnomo benefit by impartial issuance of timing information and guaranteed non-collision of IDs. This in turn, facilitates coordination, cooperation, integration and resolution of some disputes. The public broadcast of information from MetroGnomo to a MDL is a means of proving timestamp and UUID validity through alternate channels. This assures users, through retrospective analysis of the full dataset, that the MetroGnomo mechanism has not been corrupted.

Users: When a user needs a timestamp: For every validated transaction, MetroGnomo broadcasts to the MDL for confirmation: Public ledgers are maintained by cooperating organisations to:

There are numerous timestamping services, but with the exception of Bitcoin and Ethereum, none are based on MDLs, these are based on central databases. MetroGnomo’s MDL runs without proof-of-work calculations, so much faster (thousands of transactions per second) and with lower costs. It can work in conjunction with other MDLs and blockchains to increase inter-connectivity of this exciting growth in MDLs globally. 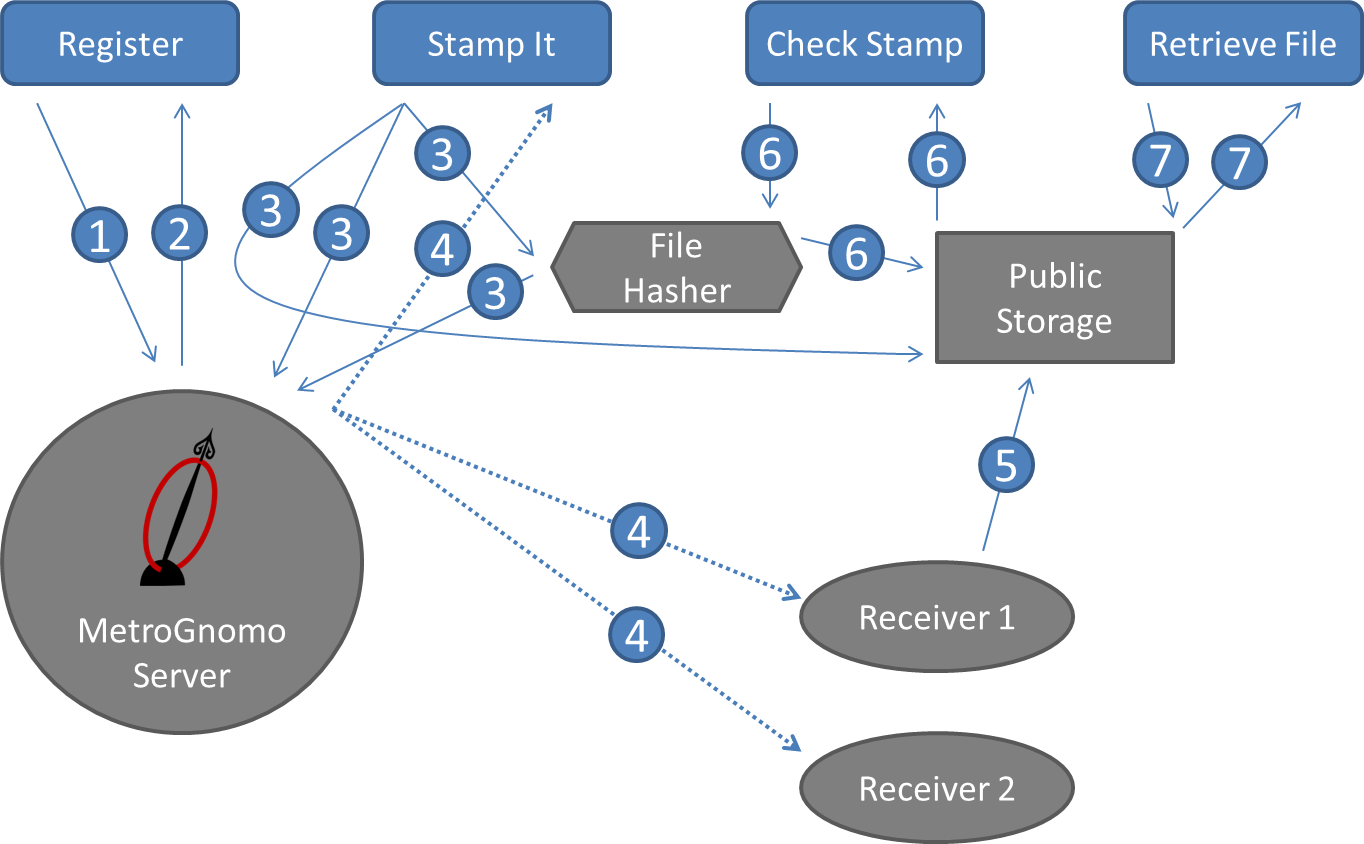 Advanced Tip: Users can independently hash a file and include it on MetroGnomo’s mutually distributed ledger within the timestamp’s description field.